Today, there was an accident on the still-under-construction replacement Twin Span bridges. A bridge girder broke, and ten workers plunged into the lake. Nine of them were recovered safely... but one died.

We sometimes forget just how dangerous this work can be. They're all busting their asses out there trying to get this bridge built as fast as possible, so that commuters have a safe option that can hopefully survive the next hurricane better. Although safety and technology have improved over the years, we haven't come along far enough to completely eliminate the risk of serious injury or death during a job such as this.

My condolences, and I'm sure the condolences of my readers as well, go to the worker's family.
Posted by Taralyn @ 19:14 0 replies

Texas's only traffic tunnel to reopen

In 58 years of existence, Texas's sole traffic tunnel (according to the article), the Washburn Tunnel near Houston had never flooded.

During the storm, it became completely inundated by the combined storm surges from the Houston Ship Channel to the south and Greens Bayou to the north. It took $100,000 to pay to have the tunnel drained of over 10 million gallons of water.

Might be worth a look one of these days now. At least starting Saturday, you can. Always worth a look if you're roadgeeking in Southeast Texas sometime soon... and in the meantime, you can almost "drive through" it on Street View.

Anyway, it's another sign of normalcy, and the area definitely needs those.
Posted by Taralyn @ 14:05 0 replies

Show me a surplus and I'll show you lobbyists with their hands out.

The Advocate - I-49 advocates ask for funds

I went into the surplus in one of yesterday's posts. As I noted there, the people behind TIMED are looking at the possibility of tapping into an expected $865 million state surplus next year. Well, they'd better do it soon, because another group is proposing using some of it to work on the southern I-49 extension (a.k.a. That Highway That Should Be Designated Interstate Six!).

The I-49 South Coalition, dormant for years, is poised not only to lobby for some of the state surplus, but also to try to get some place in next year's federal transportation bill. Even then it'd be a drop in the bucket; several billion is still needed to bring the route (currently designated as US 90) up to Interstate standards, including about $700 million for an elevated connector through Lafayette itself and upwards of $4 billion possibly needed for the section between Bayou Lafourche and New Orleans.

According to them, however, drops in the bucket can help. $25 million could build an overpass, they say, and that's about what they say they're looking for - enough for one or more overpasses. (Memo to them... interchanges help too!)

...This seems oddly familiar... ah, well. I guess the chance to get ahold of some piece of nearly a billion dollars will attract everyone, especially in an economic downturn.

Just expect more of these as next year rapidly approaches... and expect them to spend like there's going to be another surplus. Which there probably won't...
Posted by Taralyn @ 13:29 1 replies

Links to this post
Tagged: funding, future route, I-49, lafayette 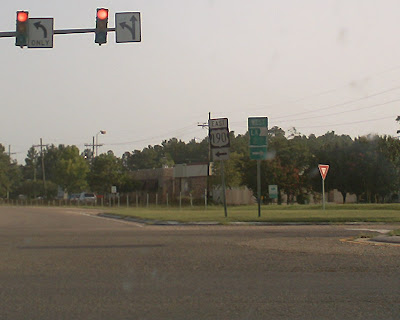 And now what is: 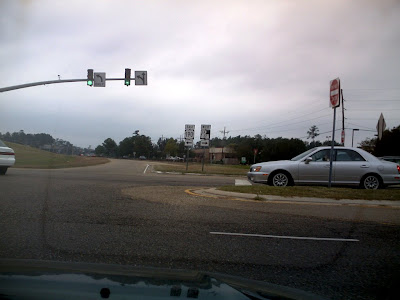 Since 1989, Louisiana has had the TIMED program, a set of vitally-needed highway and bridge projects, funded by 4 cents of the gasoline tax (out of the total 20-cent tax). Some are done already, and others are in progress. (As in "shovels have been turned" or "lanes have been closed".)

However, two major projects remain on the TIMED list... a new bridge crossing in New Orleans along Florida Avenue... and this thing:

...Lemme tell you, since TIMED passed, this thing has been held up for one reason or another. For a long time, it was due to environmental impact. Lately, it's been because nobody can decide on a concrete routing. Now TIMED is broke because people aren't driving. Go figure. Of course, if people can't afford gas, they don't drive, which means they don't fill their tanks and less gas is sold. Louisiana's gas tax is static - they charge the same tax rate whether a gallon of gas costs forty cents or four dollars. It doesn't help that the cost of upgrading the Huey Long Bridge in Jefferson Parish is running way over projections due to a general increase in cost for, oh, everything since Katrina hit.

There's also the matter of the federal highway trust fund possibly being cut by $200 million or so due to a new formula for funding being considered by federal officials.

Anyway, the Wise Ones in Baton Rouge are figuring they can funnel another 3 cents from the gas tax to get these last few TIMED projects done. There's some other voodoo economics they're looking into, such as using money collected from the vehicle sales tax to go into roads, and possibly getting their hands on some of the surplus as well. There's also the possibility of taking $50 million from employee benefits. (I got a better idea... take some of it from the higher-ups' salaries!) They've already cut close to 400 jobs to try to save money as it is, so you know the belts are getting very tight up there.

TIMED's problems are only a drop in the bucket compared to the state's transportation woes as a whole. $14 billion construction backlog, you say? Yeah, you heard me right. I'll say this much... they're going to need some more potent voodoo for the books than what they're doing/proposing/imagining if they want to finish getting any of these projects done.

You'd figure it would have to happen one of these days, sadly. I'll paint a picture for you of this road. It's extremely narrow, narrower than some of the side streets that intersect it. It's so narrow that all it has is a compact double-yellow centerline. No outer white lines denoting the edge of the road. No shoulders to speak of, just ditches at the end of the pavement. It's got lots of twists and turns, poor sightlines and heavy amounts of truck traffic. Not 18-wheelers, mind you, but smaller trucks with trailers, as that route is one heavily favored by construction cleanup drivers due it its proximity to the dump on nearby Howze Beach Road. In addition, there is a lot of truck+trailer+boat traffic as well, due to Bayou Liberty itself.

As well, the ability to upgrade it is nil for the time being, due to a severely limited right-of-way and running through an area loaded with wetlands. It shouldn't have a highway designation until it gets upgraded, but it's still designated. Truthfully, the only reason it's designated right now (according to me, anyway) is because it connects two otherwise-discontiguous sections of LA 433, and because it serves a hotspot for fishermen.

It carries a 40mph speed limit, which may regrettably be too high for the road. Honestly, I don't know how any sane person would give it a limit over 30mph. Despite all that, people still speed. You can often find idiots doing upwards of 60mph along the road. Its twists and turns in rapid succession make for an adrenaline-junkie's wet dream.

And yet, now we hear about someone dying along the road due to crashing out. It's long overdue. I also don't see what more we can do about it for the time being, other than a total rebuild, and even if that were in the cards it would take time.

The other option is to reduce the speed limit to 30mph, making it less attractive to all the through traffic that uses it.
Posted by Taralyn @ 04:28 0 replies

...And still, this is not the end of it.
Still, there are miles to tread.

Can you handle it?